Union Made: Working People and the Rise of Social Christianity in Chicago
(Oxford University Press, 2015) 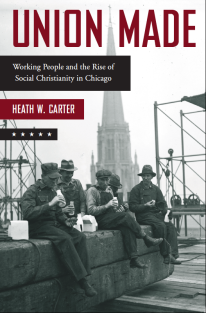 “At the height of the industrial age, working-class Chicago buzzed with talk and action about a progressive Christianity based on the Golden Rule. Heath Carter’s Union Made is a brilliantly researched, vividly written, and unfailingly wise work of history that transforms our conception of the Social Gospel.”—Michael Kazin, author of American Dreamers: How the Left Changed a Nation

“Heath Carter’s Union Made is a powerful and important book.  It persuasively documents the working class origins of Social Christianity among Protestant and Catholics alike.  It also makes clear that the decline of this Social Gospel tradition has left us increasingly vulnerable to the conscienceless capitalism of our own time.  Reading it reminds us of what we have lost.”—Jackson Lears, author of Rebirth of a Nation:  the Making of Modern America, 1877-1920

“No mere opiate or tool of oppression, working-class faith emerges from the pages of this extraordinary book as the generative force that made the nineteenth-century social gospel viable. Social Christianity made resistance against industrial capitalism and its barons a possible and necessary thing. Combining the finest qualities of classic social, urban, and labor histories with the curiosities of our scholarly (and political) moment, Union Made is a sharp, much-needed reminder that American Christianity has not always been free-market in persuasion or comfortable on the corporate side. Beautifully crafted, it is also a stirring must-read.”—Darren Dochuk, author of From Bible Belt to Sunbelt: Plain-Folk Religion, Grassroots Politics, and the Rise of Evangelical Conservatism

“Union Made provides an amazing history of the battle between elite religious leaders and workers and their pastors to define the meaning of Christianity in society. Set in Chicago… Carter’s deep research allows the words from pastors and labor leaders from across the city to come alive. If you care about the intersection of faith and labor, the development of the social gospel, or labor history in Chicago, this is a must read.” –Kim Bobo, Founding Director, Interfaith Worker Justice